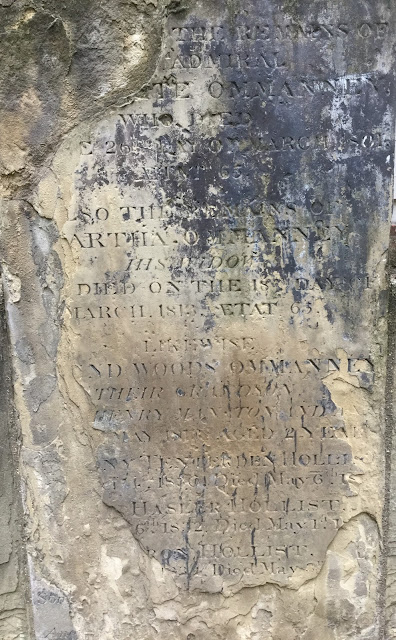 On 30 June 1923 a visitor to St John’s, Westminster reported in Notes and Queries the following inscription on a tombstone:

Fourteen years later, a correspondent to the same journal (27 March 1937) recorded that:

One of the most interesting of the memorials was badly broken in moving it, involving the loss of part of the inscription to Rear-Admiral Cornthwaite Ommanney (died 1801). Fortunately this inscription had already been placed on record in ' N. and Q.' of June 30, 1923.

Reading these notes I rashly assumed that the memorial had been lost altogether - “badly broken” would seem serious enough to warrant disposal. Not so, it turns out. The stone is in fact still there, propped against a neighbouring building. And indeed the inscription continues beyond the excerpt quoted above, as follows (the material in square brackets is illegible or missing, but I add my assumed completion): 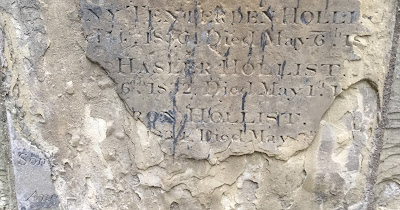 Cornthwaite’s granddaughter Frances Georgiana married Hasler Hollist (b.1799); Anthony and Capron were two of their children who did not survive infancy. It would seem likely that the Hasler Hollist referred to on the inscription is not in fact the father (for whom the date of the memorial would not make sense, and who was not in any case a blood relative of Cornthwaite and Martha), but another short-lived, but otherwise unrecorded child.

My thanks to David Bingham of The London Dead blog for spotting the inscription and taking the trouble to let me know. https://thelondondead.blogspot.com

Update to ‘Descendants of Cornthwaite Ommanney’ 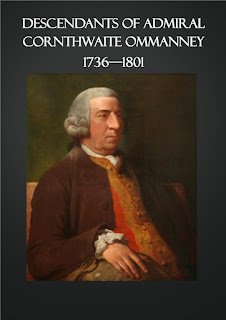 An update of Descendants of Admiral Cornthwaite Ommanney is now available here. This incorporates all sorts of new discoveries, notably including details of Cyril Henry Ommanney’s distinguished WW1 career, with his account of his experiences on the Somme, followed by a cameo appearance (we believe) in a 1920s account by a young Indian doctor of his time in London, with whom he happened to share lodgings.

It also reflects my stumbling across Augusta Becher’s Personal Reminiscences in India and Europe 1830-1888 (Constable & Co, London, 1930). Augusta was the daughter of Elizabeth Acworth Ommanney and Augustus Prinsep. She was born at sea in 1830 during Elizabeth’s return voyage to England, Augustus having just died of tuberculosis. Augusta recalls In detail her childhood experiences staying with her grandparents, Sir Francis and Georgiana Ommanney, her beloved uncle Edward Aislabie Ommanney, her mother’s difficult second marriage to Samuel Beachcroft, and the fate of her uncle Captain Walter Ommanney, previously known to us only through a dashing watercolour.

What it does not include is any information from the 1921 census. I have not yet had a chance to check this, and am frankly still somewhat seething at the decision to sell the rights to a private company who then get to charge us for access...

I have tended to pay more attention to those Ommannies who remained on the eastern side of the Atlantic (or went further east still) than those who drifted in the other direction. As anyone who has googled the name will know, however, there are certainly Ommannies in North America. This is the partial story of one of the earliest of them.

I had no real leads until I identified him as the ‘young Ommanney’ (no first name given) who features in the journal published by Allayne Beaumont Legard under the name Colorado (1872).  You can find a copy online at https://archive.org/details/colorado00lega

Legard was an Englishman who was serving in the army in Canada when he decided to embark on a three-month trip to Colorado. He arrived in New York in March 1872 intending to meet a friend, only referred to as ‘HPB’ in the journal but actualy Harry (later Sir Harry) Paul Burrard. On arrival, though, he found not Burrard but a stack of letters from him. Legard tracked Burrard down to St John, New Brunswick, where Burrard was supposedly looking after the 17-year old Arthur Ommanney (‘I all by myself, HPB positively declining coming even as far as New York, and saying that he had sent young  Ommanney, who had been entrusted to his care, on to Denver by himself… There is a beautiful mammoth hotel at St. John now, which is most reasonable in its charges. I, however, left it, and took up my quarters at a boarding house with young Ommanney, who had been entrusted by his confiding parents to the care of H.P.B. Had many and long talks with H.P.B. but failed to impress upon him that his conduct was in any way strange or different from what it should have been…’)

HPB (who was in St John to get married) somehow palmed Arthur off onto Legard permanently, and the pair then travelled on to Colorado.

The question is how Arthur had come to find himself alone in the US at that age. So far as we know, his parents were living in peaceful retirement in Putney.

They had an eventful trip to Colorado:

Left Denver at 7am on horseback…When we got in every atom of skin was blisterd off our faces, and Ommanney was nearly snow blind…

Ommanney went bull whacking to get a sack of flour, and encountered a ditch and a surly Yank. The former he had some difficulty in getting over. The latter utterly floored him, for seeing that he was new at work, with Yankee generosity stubbornly ignored the idea of helping him. He pointed out the bag of flour, and then collected his family to witness his (Ommanney’s) frantic struggles to get it to the waggon, while he indulged in sneering and vulgar remarks upon once having been an English gentleman himself, and the necessity of being able to work hard in this country. Ommanney, however, got the flour on the waggon and safe home…

Once in Colorado, Legard bought a 320-acre property in the Wet Moutain valley in Custer County, near Rosita. This he left in Ommanney’s hands when he returned to New York and embarked for Southampton in June 1872. (‘Got power of attorney correctly fixed up for Ommanney to act for me, and deposited it at the bank… Sorry to leave Ommanney to such a lonely occupation, but I think he really likes it. He is a good lad…’)

We do not know what happened to Arthur directly after that, but around 1880 he married Maria Wright. They had six children, the first born in Colorado in 1880. In 1890 there is a record of the family arriving back in the US after a transatlantic voyage from Glasgow. They were divorced in 1900 at Denver.

On 14 May 1907 married a Norwegian, Bertha Aandahl, and they had children.

A photograph of the younger George Campbell Ommanney 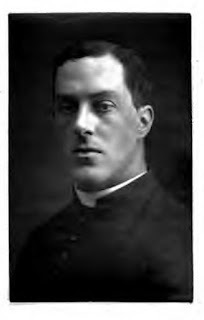 Some time ago - so long that I had forgotten until I was recently reminded of it - I saw a listing in a library suggesting that they held a large Ommanney family tree from the early 20th century. I had for a while intended to motor down there and take a look, but I never quite got round to it. No matter. I have recently received a series of photographs of this same document from an Ommanney descendant who also has a copy (my thanks to Jayne, and her brother).

It has set several hares running and I will be producing an update of my document Descendents of Admiral Cornthwaite Ommanney shortly. Somehow, once you have a tip-off in genealogy, it is much easier to track down further details. And the 1929 tree is a hatful of tip-offs.

What is most striking is just how accurate it is. Of course, in 1929 they were closer to the action than we are now. But I can sit here calling up all sorts of documentation from the 18th to the 20th centuries at the touch of a button; they had to pack a dozen valises and jump into the Bentley for a weekend jaunt down to the library at Portsmouth to achive the same thing. And yet almost every new detail on the tree is backed up by all the evidence I can muster. It is most impressive. 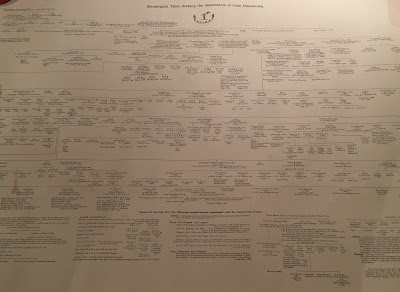 John Ommanney was Cornthwaite’s great-grandfather. It seems though that every more recent Ommanney can be traced back to Cornthwaite rather than to his brothers or uncles.

The portrait below has recently been made available by the National Portrait Gallery. 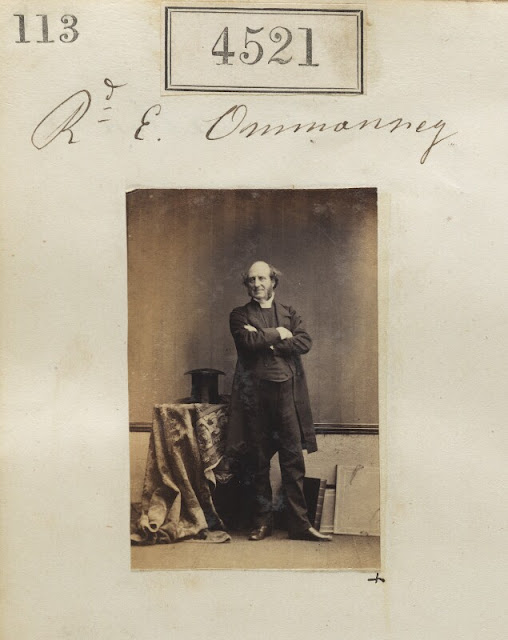 A number of other Ommannies are in their collection but not yet digitised. These include Honoria Catherine Ommanney and three more shots of Francis Downes Ommanney. I don’t know what their timetable is but it looks like they are working their way through them. If they are doing it alphabetically, we might expect them very soon.

I have received a few helpful pointers following my previous post, most of all from Giles Colchester, a descendent of the Nettletons who knows more about the school than I expected to find out.

Courtesy of him, here are four picture of what Francis Ommanney called that "huge, red brick, hideous house and the level expanse of playing field that lay behind it": 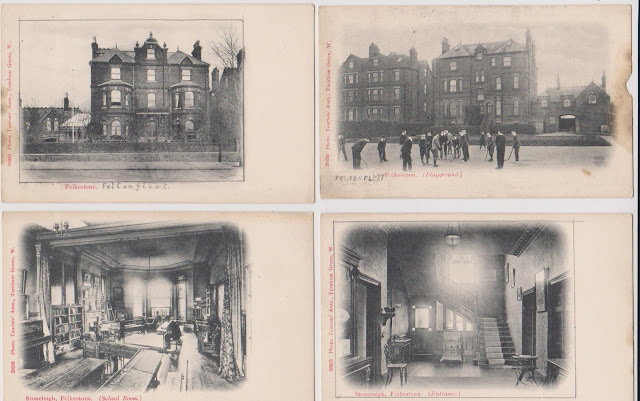 It turns out that Mrs Nettleton's school at Stonefleet was destined to become Feltonfleet, which moved to Cobham, Surrey in 1917, to escape the airship bombs. It is still there. I ought to have known, as my brother-in-law was a pupil. It's funny how these things turn out.